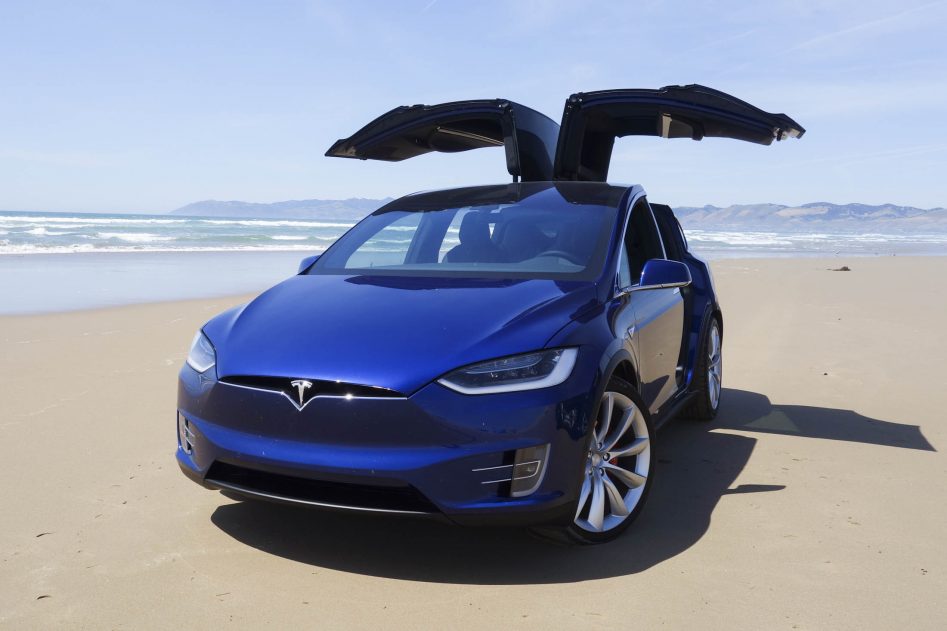 Last week I spent most of my waking hours inside an ocean blue Tesla Model X P90D.

I was in California to film several cars for Bloomberg, but the practical Model X was the main conveyance between the shoots and the subject of the biggest shoot. I used it to tool from Los Angeles to Santa Barbara, through the mountains and along the coast, winding my way up to Big Sur and back again.

Last fall I had driven it a little around downtown L.A., in what was probably the most hyped car revelation of 2015, but this was the first time I could really put it to the test. The $151,150 crossover I drove proved practical, reliable, and capable on the road. It’s a great car. It looks elegant and is the most technologically advanced vehicle on the road today, by far.

Should you buy it? The answer depends on just how committed you are to the all-electric lifestyle.

More on that in a second, but first, the good stuff.

Tesla’s seven-seat P90D is the most powerful and most expensive version of the Model X you can buy; a 90 kWh battery gets 255 miles on a full charge, with a dual motor (D) arrangement that enables its all-wheel drive. (The leftover «P” stands for performance.) It can go to 60 mph in 3.2 seconds, which beats the $160,000 Porsche Cayenne Turbo S by 0.6 seconds. On paper it is the fastest production SUV available. Total output is 762-equivalent horsepower. That’s more than Bentley’s new Bentayga.

Push on the gas pedal, and the car surges forward like a rocket in a silent movie—pure thrust, no rattle. Tesla has used much of the suspension, acceleration, and power technology from the excellent Model S, plus variable ratio technology that adjusts steering to your driving style and terrain. If you have driven the sedan, the crossover, while taller, feels very similar in its finesse. And yes, the $10,000 Ludicrous Mode power-up is totally worth it. The engine-less ride is quiet, so quiet, in fact, that at 40 mph with the windows up, I could hear crickets and frogs one night driving near Big Sur. The panoramic windshield that extends from chest level over and behind my head held a panoply of stars. When you operate the Model X, you’re piloting a piece of technology rather than driving a car. Everything else feels analog.

Except for its brakes—they could use some finesse. Their regenerative capacities can be adjusted based on how smooth you prefer them, with more efficiency (i.e. more regeneration), meaning they feel more abrupt. Although in any mode, they can feel too light and late if hard-pressed.

Much has already been said of the Model X’s pleasing design—and it’s all true. To my eye, the subtle grill and smooth, soft roofline seem understated, even generic, in a good way. This is a better tactic than making an already progressive car even more difficult for consumers to swallow by making it look funky. (A Prius this is not.)

It remains low-key until you walk up to it: The front doors swing open automatically as you approach (with your key fob), sensors stopping their swing shy of any neighboring cars. And once you open the falcon-wing side doors, everyone wants to come have a chat. No trouble here; I only wish they were as quick and easy to use as a regular door that you can slam shut—these require some patience as you push a button and have to wait for them to unfold along their twin hinges every time. It’s only a couple of seconds, but like automatic trunks, it can feel sluggish.

The third row, of two seats, is indeed easier to access than any car in the market. Storage capacity is generous with two trunks, back and front, plus a hidden subcompartment that even professional valets failed to find until directed to it.

The dominating feature inside, other than that windshield, is the 17-inch touch screen in the middle of the dash. The entire car might as well be a shell for that command center—it’s your direct link to the car’s nervous system. Despite past reports of glitchy freezing, I experienced only flawless execution here.

Charging and navigation mix closely here—when you use the excellent voice-recognition system, it routes you according to where superchargers are located on your route. It may not be the fastest way home (this, to me, is a flaw), but it ensures you won’t run out of juice. I almost never use cars’ internal mapping and navigation systems after I run them through their review paces—they are often annoying and imprecise, if not plain wrong—but I kept the one in the Model X on the entire week. I loved it.

What I didn’t love is that you are forced to think about charging the Model X. Constantly. Especially if you, like me, are slightly obsessive about how much fuel your car has at any given time.

And this is where you really have to think hard about whether you want to jump into owning an electric car.

If you charge a Model X at home over night, every night, battery life probably won’t ever be an issue for you—you get 255 miles on a single charge, with a full-charge taking around two hours. Tesla says the efficiency is equivalent to 90 mpg. But if you plan to use the car for hours on hours every day, you’re going to need to readjust your expectations for defining personal mobility.

For instance: It was not fun to start a 340-mile road trip to L.A. early one morning to make a 10 a.m. business meeting. I estimated that I’d have to charge the car once. I had to charge it twice. I was more than a little late by the time I arrived.

Likewise, the amount of charge you have left in the battery can be deceiving, as it doesn’t decrease at a stable rate. (Those with iPhones will understand.) I once filled my battery to 212 miles for a 205-mile trip but had to charge it again partway through.

Tesla says that driving style and conditions affect battery range. (Are you hard on the accelerator? Do you blast the AC? Do you swerve across lanes frequently and surge past cars a lot? Is the weather freezing? Is the wind blowing against you?) They certainly do. The range listed on the Model X battery should be taken as a general estimate rather than an exact-to-the-mile reading.

The company has done a great job of maintaining its clean, efficient, and free-to-use superchargers, and the mandatory charging stops can be nice opportunities to get coffee, make phone calls, or pay bills. And you can make your charging sessions only 10 or 15 minutes long, if you’re OK with having more of them. But it’s an aspect of owning a Model X that is something to think about. There is no way getting around that they take longer than a fill-up and are not as convenient as your corner gas station.

That’s what I mean when I talk about “the electric lifestyle.” When you own a Tesla, you join the crew of people who think about their mobility differently. If a “normal” luxury car purchase is a statement of personal philosophy, progressiveness, status, and values, the purchase of a Model X makes twice as strong a statement.

Tesla has been smart to build a luxury crossover SUV that falls into the most exciting and profitable segment in the auto industry. The Model X is capable and fast. But do you want to join the tribe?